From Dawn ‘til Dusk, These Two Entrepreneurs Make Mindfulness the Life of the Party

This article is featured in the March 2016 edition of The Slice, a monthly digest created in partnership with Tablet Magazine that offers news, stories, ideas and opportunities—with a Jewish twist.

“If you look at history, humans have been dancing together in community for thousands of years,” explains Matthew Brimer. “There’s something very, very visceral and very human about that, and there’s something very tribal about it that’s been consistent across cultures and across the world.”

With his business partner Radha Agrawal, Brimer is the co-founder of the 6 AM, healthy-refreshment-filled international dance party known as DAYBREAKER.  In 2013, Brimer, 29, and Agrawal, 37, both entrepreneurs, community builders, longtime friends and fellow “burners”—Burning Man devotees—decided to embark on an experiment: to organize early morning, weekday raves at venues around New York City. “It was really an art project with the intention to think about how the community could gather in a way that was not divided by alcohol, mean bouncers, and a digital divide…The idea was borne out of this frustration around nightlife and desire to bring community back in a real positive way.”

At the time, the pair had no thoughts of this project going global, or of it becoming a full-time job. They simply wanted to create something for themselves and for people like them—that is, for people who love to move their bodies to live music, and who’d rather not do so amid copious shot taking and hordes of club-goers trying to catch the approving eye of a scowling bouncer. Rather, they wanted to create a healthy, joyful communal experience first thing in the morning that’d help set a positive tone for the rest of the day, since, as Agrawal says, “the morning is a time when everyone’s cup is full, everyone sees life as full of possibilities.”

They had saxophone players, horn players, DJs. There was coffee, juice, smoothies, water.

Above all there was a positive vibe, “unparalleled,” Agrawal recalls, like “magic.” There was no doubt they’d hit upon something big. One hundred and eighty people showed up that first time, and when it was over, those attendees lined up to hug the two and to thank them for what they had created. Encouraged by the feedback, they turned DAYBREAKER into a recurring party. And not just one that takes place in New York City—DAYBREAKER events have popped up in cities around the world, from San Francisco to Paris to Sao Paulo, and plans are afoot to expand to 12 more locales, including Tokyo, Cape Town and Tel Aviv. Brimer and Agrawal estimate that over 150,000 people around the world have now been to an event and have been introduced to the DAYBREAKER lifestyle.

That lifestyle is one that promotes wellness, camaraderie, community, mindfulness and, interestingly, mischief. That last one “is a big value of ours,” explains Agrawal. “Going against the grain, giving a little wink to the world, like, ‘I’m going to get up early in the morning and dance.’”

But just as day yields to night, Agrawal and Brimer realized the same spirit—of community, of dance, of wellness—could drive an event after work, too.

“Normally, in the evening, people might go to the gym or if they want to socialize, they go to happy hour,” Brimer says. That “usually means going to some really loud, noisy bar that’s packed with people. Everyone’s jostling for position, everyone’s drinking, it’s very alcohol heavy. Maybe you meet some people, maybe you don’t and then it’s over and you’ve had several drinks and you’re tired, you’re groggy.”

He and Agrawal wondered: why does happy hour have to result in a headache and next-day regret?

“Let’s go back to the lab and experiment and see if we can bring the magic of DAYBREAKER, that conscious, healthy vibe, the music, the art, the performance, the immersive theater and create something that happens in the evening so people can come after work,” he said.

Enter DUSK, the first of which took place late last month at Temple Emanu-El on Manhattan’s Upper East Side. Co-sponsored by the Charles and Lynn Schusterman Family Foundation, DUSK drew an estimated 800 attendees who arrived dressed in Gatsby-inspired garb in accordance with the event's alcohol-free, Prohibition-era theme. The Foundation first became acquainted with Agrawal in 2015 when she attended REALITY: From Eden to Zion, an immersive leadership journey through Israel catered to members of the Summit community. Brimer will be embarking on the same trip later this year.

In choosing Emanu-El as a setting, Agrawal and Brimer were not  intending to direct attendees to organized religion, per se. The Schusterman Foundation was “trying to figure out how to get millennials to the synagogue, and we thought, what if we do it as synagogue? That would be the perfect marriage of spirituality and nightlife,” Agrawal told the New York Blueprint.

Indeed, this was the first time they’d ever planned an event in such a location. It “felt really epic and sacred, and that blended the worlds of spirituality, meditation, consciousness, dancing and going out on a night on the town,” Agrawal told The Jewish Week. Indeed, the evening kicked off with meditation (DAYBREAKER events typically start with yoga), so that everyone could recalibrate and shed any negative feelings from their work day.

Then, after a bell tolled, a gospel choir and a group of musicians led revelers downstairs to the dance party, which featured a brass band and a beat boxing/ violinist duo. For three non-stop hours, people got their groove on and their sweat out.

Encouraged by the evening’s success, Agrawal and Brimer are already working on their next DUSK event. In addition, they’re preparing a content channel that’ll offer DAYBREAKER and DUSK fans tips on how to build community, how to inject moments of mischief into their lives and how to encourage mindfulness. These goals are embodied by the prayer-like wish Agrawal recited to close the first DUSK party:  “Let there be love and understanding among us.”

The Charles and Lynn Schusterman Family Foundation is proud to empower emerging leaders to explore their values, identity and new ways to strengthen their communities. We believe that as we work together to repair the world, it is important to share our diverse experiences and perspectives along the way. We encourage the expression of personal thoughts and reflections here on the Schusterman blog. Each post reflects solely the opinion of its author and does not necessarily represent the views of the Foundation, its partner organizations or program participants. 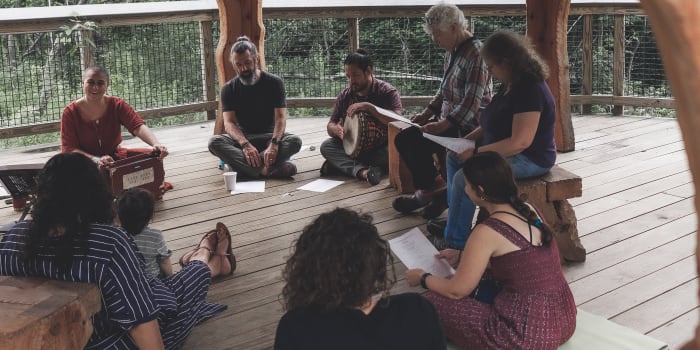