Sharonna Karni Cohen had an idea, she said, “to connect people to what their individual dreams are for the future and move away from their cynical side.”

This was not the kind of dream that turns to vapor when eyes flutter open in the morning. It was actionable, realizable and existed on the conscious tip, in the sun-filled, waking world of possibility.

Her dream was that on a single day—June 21—hundreds of people would put down their phones and computers. They’d abstain from social media and selfies, and instead convene for sun salutations, meditation, and dance undertaken on yoga mats that serve both as surfaces for downward dogs and as canvases for illustrations. Those illustrations would be visual interpretations of the hundreds of dreams and hopes about the future articulated and submitted by members of the public. Though the mats would be individually engaging, puzzled together as composite, they’d form an image at once detailed, whimsical, vast and inspiring.

These would include wishes for rainfall, for mass transit, for peaceful coexistence and for human connection.

For those oblivious to Earth’s progression around the sun, June 21 has singular significance: it’s the summer solstice this year—the longest day of the year—and, since 2015, it is also International Yoga Day. Karni Cohen would use the occasion to bring together those young and old, Jew and non-Jew, Israeli and Arab, to celebrate and relish in the transcendent energy and joy of fellowship, intentionality, imagination and balance.

Called "The Big Dream," the project was inaugurated last year in Tel Aviv’s Rabin Square with 1,500 yoga mats and hundreds of enthusiastic practitioners, each of whom got to take a mat—and a piece of the dream—home with them.

(Aerial view of The Big Dream in Tel Aviv in 2017; Credit: Amit Trainin)

This year The Big Dream is moving eastward, to Jerusalem, “one of the most mystical and spiritual cities in the world, with so many religions, so many cultures,” Karni Cohen said.

“At the same time it’s such a complicated city and has a lot of political conflict right now. But at the end of the day it has one of the most interesting histories of any city in the world,” she said, adding, “It’s important to remain optimistic about what this city stands for.”

Planning for The Big Dream’s Jerusalem iteration got underway in April. She and her team solicited about 200 dream ideas—answers to the prompt, "Imagine Jerusalem as a city buzzing with culture, spirituality, peace & co-existence in 30 years. What else do you see?"—through city channels, schools, and the ROI Community of the Charles and Lynn Schusterman Family Foundation, which supported the project through the Grassroots Events program. Karni Cohen and many of her Big Dream collaborators are members of ROI Community, a network of Jewish activists and innovators who take an active role in shaping the social landscape of Israel and the future of the Jewish and broader worlds.

The art for the Jerusalem yoga mats, created by illustrator Amit Trainin who was also the creative engine for last year’s Big Dream, falls into two main categories: a wish for the continued existence and health of the Dead Sea and envisioning the innovations that will be part of daily life in Jerusalem three decades in the future. So far, 500 people have signed up to take part and 701 custom-made entirely eco-rubber yoga mats have been manufactured and delivered. 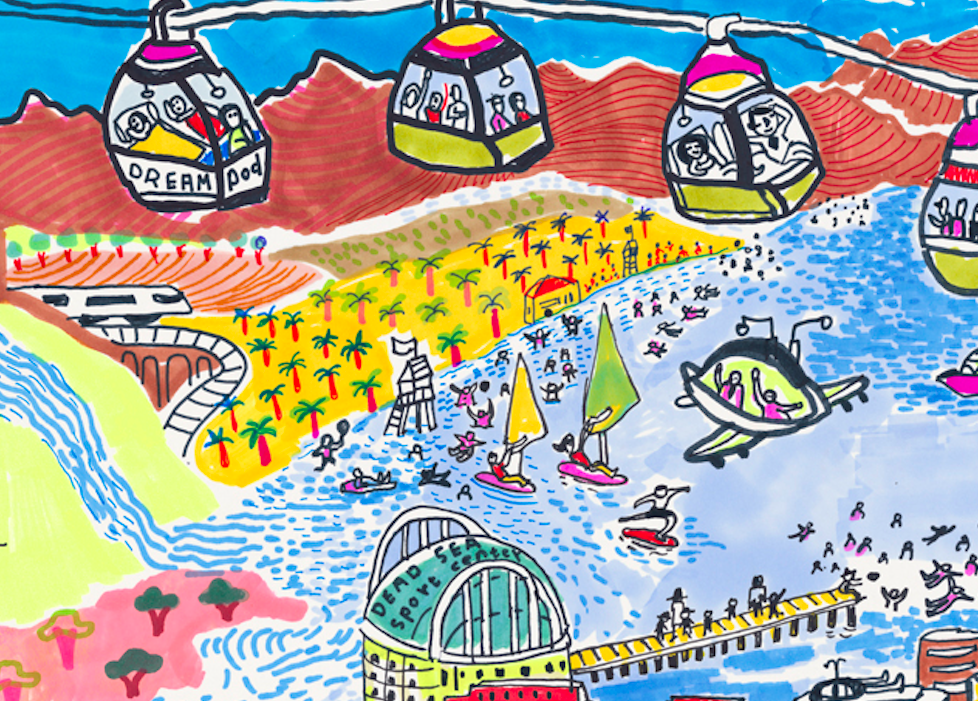 (Mat design for The Big Dream in Jerusalem in 2018; Credit: Sharonna Karni Cohen)

Some critics may consider Karni Cohen’s project tonally deaf, an inadequate Pollyanna-like response to tensions that plague the region.

Karni Cohen doesn’t deny her own naïveté. In fact, she owns it.

It’s “part of my DNA,” she said, and “part of the game of life. I’m not saying ignorance always is bliss, and I like to learn the markets I’m working in, but this country is unstable, there is a lot of conflict…but we all want to stay alive and we all dream for a better future. And I really do believe that utopia is a way to open peoples’ minds” to one another and to shared human experiences.

To that end, she plans on future Big Dreams. She has received inquiries about mounting Big Dreams in Hong Kong, Paris, New York, Los Angeles and London and would love to hold a Big Dream as part of an Olympics opening ceremony.

“There’s no point in just sitting and writing negative posts on Facebook about what’s wrong, when you can actually try and dream and make your dreams come true, which,” she noted, “is how I live my life every day.”